I got there first thing in the morning naively presuming it wouldn’t be that busy… But I was so wrong. The place wasn’t even due to open for another half hour and there were thousands of people waiting (if not more!). The crowds were insane! And at least a quarter of the people were dressed up in crazy, amazing, out-of-this-world, mind-bogglingly-awesome costumes. I couldn’t believe my eyes! People got super into it! It was really super cool!

What was also cool was how nice everyone was. I made so many ‘insta-buddies’ there since we spent a lot of time in queues for various things, and we just bonded over geeky fantasy/sci-fi stuff while we waited. It was awesome.

In fact, the entire event was just in the realm of oh-my-gosh-amazing. I got to meet Orlando Bloom, who was, (quite surprisingly), a seriously nice guy. Very softly spoken (again, surprise), and very British (sorry all you hard-core fans out there, I had no idea he was English! I just presumed he was American!)… 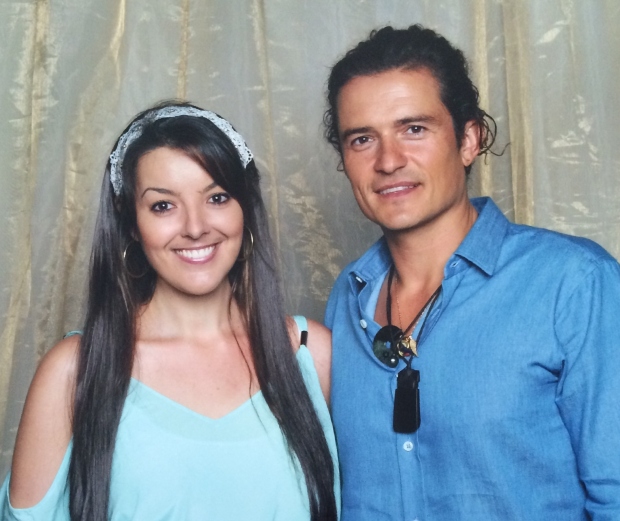 Then after the seriously cool moment of meeting Orlando, I took my star-struck self to see an Q&A thing with Colin Ferguson. I’m a huge ‘Eureka’ fan but what was so amazing was that Colin is JUST like the character he plays – Jack Carter – in real life. He’s so flipping funny! And so animated! And super amazing with people; he was just extremely relatable and communicable. He was also so down-to-earth, or at least he came across that way. And when I met him in person a bit later, he really showed that to be true. I got to have an actual proper conversation with him which was awesome and I basically just said something along the lines of, “Thanks for seeming so much like Jack Carter in person.” And I kind of said it flippantly, but he looked at me with the most genuinely pleased expression on his face and said the most whole-hearted, “Thank you!” Then I went on to tell him how much I enjoyed his Q&A and how great a communicator he is, and, no joke, he almost looked like he was getting emotional. (In a good way). He even said something like, “That means a lot—thank you so much!” and it wasn’t a flyaway comment either, he really truly appeared to be grateful! He seems like he’s just such a super nice guy. In fact, of the day, I think one of my highlights is meeting him, since he was just so nice! Here’s a pic of us:

I mooched around for a while after that and then I ended up getting to see Jason Momoa too, which was pretty cool. I’ve never watched ‘Game of Thrones’ but I love ‘Stargate Atlantis’, so seeing him was really awesome too. And, wow, he is ripped. As in, muscles-on-muscles. Very impressive. (Don’t judge me! That kind of physique earns the respect these few words provide, haha). But he seemed really cool too – almost like a big teddy bear. I saw him in a Q&A thing later in the day and, golly, he has a foul mouth! (But he did apologise for it, at least – and he kept trying to talk in code once he realised kids were in the audience. It was pretty funny!). He also came into the Q&A carrying a cardboard box which he said was to “brew his coffee” and he ended up ‘sneakily’ pulling out a beer and pouring it into a coffee cup (aka, ‘brewing coffee’). Very amusing for us in the audience, especially since he’s great with his facial expressions and made it even funnier anytime he needed a “sip of coffee”. And, funnier still, when he was asked about the most important thing to do when directing, his answer was: “Make sure your cooler is full—of ‘coffee’.” Hehe… Little bit amusing. And speaking of amusing, he also gets points for telling a story that involved a Korean bathing house and required him using the word “hoo-haa” in an extremely inappropriate manner. It was hilarious with a capital H.

But anyway… See how big he is here—his arm muscles don’t even fit in the photo!

Later on I also got to see two of the dwarves from The Hobbit in a Q&A—Stephen Hunter (aka Bombur) and Dean O’Gorman (aka Fili)—and, oh wow, they were so entertaining! Some direct quotes from them:

Question: What was your inspiration to become an actor?

Dean O’Gorman: Inability to do maths.

Stephen Hunter: Make a lot of money without having to do a lot of work.

Question: What was the hardest thing about dwarf boot camp?

Stephen Hunter: The shoes. It’s like running with a three-year-old on each foot.

Question: Why do you think you were chosen to play the roles of the dwarves?

Stephen Hunter: We were cheap.

But yeah, so many other things happened and it was a crazy-crazy-fabulous convention, but those are the highlights that I can remember. One thing is for sure, I’ll definitely be going again!

That’s all I have to say for now, but stay tuned: in a few days I’ll write up a post about everything that happened at the Brisbane Writers Festival. That was also fabulous!